By SabineJune 18, 2015No Comments
The leopard is one of the hardest animals to spot on a safari in Africa! They are one of the 3 big cats found in South Africa. Being solitary and secretive big cats they generally go out of their way to avoid one another as well as people.
Leopards are smaller than Africa’s lions and cheetahs, with short legs and a long body with a large skull. Their pale yellow to deep gold fur is marked with rosettes, making them well camouflaged in an African setting. The rosettes are circular in East African leopards but square in Southern African leopards, and are called rosettes because they are similar to the shape of roses.
They can run in bursts up to 58 kilometres per hour (36 mph), and climb a tree as high as 15 metres (50 feet). These strikingly beautiful cats can leap 6 metres (20 feet) forward and jump 3 metres (10 feet) up.
Habitat
Leopards live in the thick forests of West Africa to the plateaus of Ethiopia, but they prefer thick bush and grassland with trees. They can adapt to life in woodlands, mountain coastal scrub or semi desert areas. These cats are found throughout the savannah’s of South Africa. They call various types of landscapes home but as long as they are near some water and trees. Leopards live in more places than any other big cat although they are the rarest of the cats to see.
Behaviour

When they are not in hunting mode, they walk through herds of antelopes with their tail over their back to reveal a white underside, which gives the signal that they are not out to capture food.
Leopards do not roar, but make a somewhat distinctive deep and raspy sound to warn off other leopards in the area or to communicate with a potential mate. Just like your pet cat, they purr when happy and growl when angry.
Diet
They eat fish, reptiles, birds and mammals such as wild hares, warthogs, monkeys, baboons, zebras and bucks such as impala’s and antelopes.
Leopards are mostly nocturnal, preferring to hunt at night and rest during the day in branches of trees. They are opportunistic hunters and will stalk their prey from trees or in long grass. After capturing their prey they will usually haul them up into the safety of a trees branches out of grasp from being stolen by scavengers.
Reproduction

A female leopard is called a leopardess much like a female lion is call a lioness. Female leopards can give birth at any time of the year after carrying their cubs up to 106 days. They will usually have 2 greyish in colour cubs with barely noticeable spots. Cubs are born blind then begin to see from 10 days old, and their eyes remain a bright blue for a few months after they are born.
Her cubs will live with her for about 2 years before setting off on their own. Leopardesses will hide her cubs in safe locations and move them from one safe haven to another until they are old enough to play in the open and learn to hunt. 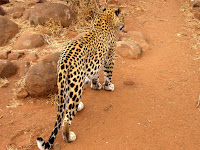 Did you know?
Leopards are not only strong climbers but they are also superb swimmers.
A leopard can hear up to 5 times better than a human.