Reptiles found in the Kruger – The Nile crocodile

By SabineNovember 5, 2015No Comments
There are a total of 23 crocodilian species in the world. These scaly and powerful reptiles evolved from the prehistoric dinosaur’s antecedents some 240 million years ago.
The Nile croc is the largest and most common species of croc in Africa. It is the second largest in the world after the Saltwater crocodile with the dwarf croc being the smallest. The Nile croc is broken up into 7 subspecies of which the South African Nile croc lives along the river backs in the Kruger. The African slender snouted and the African dwarf croc are also found in Africa. There are believed to be several thousand crocodiles existing in the Kruger National Park giving you a high chance of spotting one while on a safari drive.
There scaly and armoured reptiles, a dark olive brown in colour, with a black crossing branding their entire body including tail, are usually 5 to 6 metres in length. Their colouring gets fainter as they age living up to an average of 45 years in the wild but are known to live between 80 to 100 years in captivity. 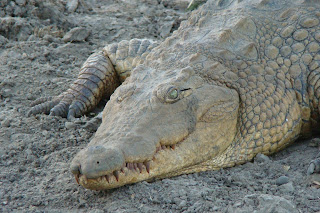 They are fast both in water and on land over short distances. A crocs jaws are strong and equipped with a set of razor sharp teeth that are often replaced. However once their jaw is held shut it cannot be opened. Their claws are sharp and their tails powerful enough to deliver a forceful blow. Their eyesight is excellent both during the day and at night and crocs are able to protect their eyes when swimming and hunting with the use of a third eyelid.
Habitat
The Nile crocodile is found in sub-Saharan countries such as South Africa, Botswana, Egypt,

Mozambique, Namibia, Somalia, Zambia and Zimbabwe, as well as the island of Madagascar off the east coast of South Africa.

These crocs always live near water such as along riverbanks, lakes, freshwater marshes, estuaries and in mangrove swamps.
Behaviour
Crocs are considered to be social animals and have a hierarchy which is determined based on their size. Groups of crocs are known as floats when in water and basks when on land.
They are often seen with their mouths open, which is called gaping, along river banks in the Kruger. They do this as a means to cool down, as heat can escape through their mouths when open.
Diet
Crocs are carnivorous ambush hunters; they lie unnoticed in wait for their potential prey to get closer and then leash an attack.
A crocs diet changes as they age. The very juvenile crocs eat insects, snails, spiders and small aquatic animals. Youngsters eat toads, frogs and small fish while adult crocs also eat other reptiles such as terrapins and snakes, as well as rodents and birds. As crocs get older they will hunt down prey such as zebras, hyenas, baboons, wildebeest, antelopes, giraffes and big cats. 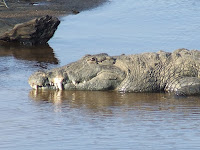 They swallow small stones that aid in digestion by grinding up the food in their stomachs. Crocs are capable of going months without eating due to their slow metabolism.
Reproduction
A crocs sexual maturity is based on their size with females being sexually ready at 2.6 metres and males at 3.1 metres in length usually taking up to 10 years for each sex to grow to.
In the Kruger National Park, crocs start to nest during the months of November and December. A female croc may lay anything between 40 to 60 eggs in a 50cm deep nest at a time. She will remain near the nest at all times to keep an eye on the eggs which remain in incubation for between 70 to 90 days. The sex of the young croc is determined by the temperature of the egg; females develop when the temperature is below 31.7 degrees Celsius or when the temperature is above 34.1 degrees Celsius , males are born when the temperature is within the range mentioned.
When the little croc is ready to break out of its egg, it will start to make a high pitched chirping noise to alert its mother it’s ready to emerge into the world. Not only mothers will help the little one break free from their egg, fathers will sometimes stand in to help too. They help the baby croc to rip out of their eggy world by gently cracking the shell of the egg using their teeth and tongue. Although ferocious predators, crocodiles are caring parents.
There are a high number of attacks on eggs by predators such as hyenas, and monitor lizards when the female needs to cool off in the water due to thermoregulation. Many of the youngster crocs are eaten during their first year by other crocs, birds of prey, large fish or monitor lizards.
Did you know?
Crocodiles can kill with the hardest bite force of any animal on earth.
Crocs account for several hundred deaths and disappearances a year.
Unlike other most other reptiles who have a 3 chambered heart, crocodiles have a 4 chambered heart.
Tips on dealing with crocs
Don’t make loud splashing noises if having to cross croc infested water.
Stay at least 3 metres from the water edge if possible.
If caught by a crocodile, poke them in their eyes, nostrils or throat, as these are their most sensitive areas.