Reptiles found in the Kruger – The Striped skink 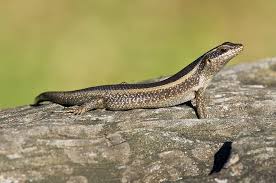 Skinks are part of the squamata order; members of the order are known by their skins which bear either scales or shields. With about 1 400 species of skinks, they come in many different colours, sizes and shapes making a variety of different looking characters. These small reptiles are divided into four subfamilies with two of the subfamilies being legless and the hundreds of species in the other two subfamilies having limbs.
Striped skinks are lizards within the skink family and so called due to the stripes on their body. There are a variety of subspecies of striped skinks varying in different coloured stripes and bodies. These small reptiles have overlapping scales which usually have a smooth texture a shiny glimmer. The species of striped skink found in the Kruger most commonly is referred to as an African striped skink or simply a striped skink.
This skink is a brown in colour with two yellowish stripes running down the length of body on either side of their spine. Some skinks have a window on each of its lower eyelids, including this subspecies of striped skink, meaning the eyelid is transparent and they are able to see through this window when the eyelid is closed. Both the female and male can grow to 23cm in length. 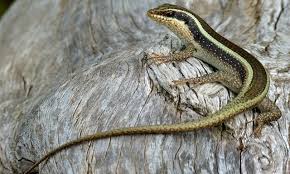 Habitat
There are various species of striped skinks found through-out the world except for the icy continent of Antarctica. The African striped skink is rife in southern Africa countries, such as Angola, Zambia, Namibia, Botswana, Zimbabwe, Mozambique and parts of central and eastern South Africa.
They live in various habitats, from mangrove swamps to dry savanna areas and are commonly seen in suburbs. Skinks can easily climb over rocks, up walls of houses and climb trees.
Behaviour
Skinks, like many other lizards, can release their tails freely when captured by a predator. They often move or wave their tail as a means to distract the predator away from their body and once the predators snatches their tail they contract their tail muscles and the tail is then detached.

Energy has been stored in the tail and is used for thrashing movements once the tail is released which further distracts the predator. The striped skink then walks away to safety with its life.
Diet
Their diet includes small insects, such as beetles and moths, and other small invertebrates. They forage from rocks, trees and on the ground, by dashing a short distance from cover to pick up food. 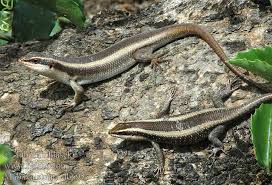 Reproduction
The female lays a small clutch of soft shelled eggs in a shallow hole under a boulder warmed by the sun.

During summertime, the striped skink will have between 3 and 9 babies that are sexually mature by 18 months old.
Did you know?
Some people keep striped skinks as pets.