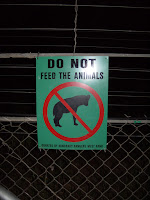 Hyenas, are Africa’s biggest carnivore after lions and there are three subspecies living throughout the plains of Africa; the Brown hyena, Striped hyena and the Spotted hyena. The more commonly seen hyena is the Spotted hyena, also known as the laughing hyena, which has coarse, short and sandy coloured fur with dark spots.
Large, with a dog-like resemblance and distinguishing sloping back, it makes for an unusual sight. They belong to the hyeanidae family and weigh around 60kg, with females more muscular, aggressive and larger than their male counterparts due to three times as much testosterone. The females have a pseudo-penis, used for urination, mating and the birthing of cubs, which can make delivery a potentially dangerous and difficult process.
Hyena’s are highly vocalised animals, who make sounds such as wails, howls and cackles. They don’t cackle to pass the time or for fun, but rather as an indication to others of their age and social status or to communicate their frustrations. They are intelligent, adaptable and social animals, with males who baby-sit and a dominant female who leads the clan of between 10 to 40 individual hyenas.
Hyenas have powerful, bone crushing jaws and teeth that are capable of breaking down an entire animal corpse. They eat a varied diet, from different species of antelope through to other herbivores such as zebras, warthogs, and young giraffes, hippos and rhinos. Commonly perceived as scavengers, hyenas not only feed on the left over or stolen carrion of other predators but are opportunistic and skilful hunters.
Spotted hyenas live within a matriarchal society in a range of habitats, such as savannas, grasslands, woodlands and sub-deserts. By far the most commonly seen hyena in the Kruger is the spotted hyena. As these hyenas hunt and scavenge mostly during the cover of darkness, you will see many at night if you hang about near the fence in the camp sites at the Kruger, as I (Keira) did on my safari trip as a member of the Epic Enabled team. 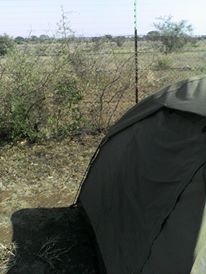 After my very first hyena sighting I was instantly spellbound with watching these characteristic, wild animals with their grinning faces and humped backs. With my tent unintentionally pitched in a no-tenting area from the night before, I was a mere few metres from the fence erected by the park in order to keep the wild animals and human beings safely separated from one another.
George and I had moved my temporary home, after a few glasses of papsak wine, so I could be closer to the hyenas. It was only when the sun had risen had I noticed it was a not a tenting area, but despite this I decided to leave it where it was for the final night.
On the second night of our stay in the Skukuza campsite under the full moon, I patrolled the borders of the fence, just my trusty torch and I, once everyone else had retreated to their rooms for the night. After quite some time watching numerous hyenas pass by, and hearing others cackle in the distance, the distinctive and somewhat scary roaring of lions, and the sound of rustling in the bushes, I decided it was time to get some sleep.
Feeling a little scared of what could be out there, I put my boots, torch, and phone near the escape compartment of my tent just in case I needed to make a run for it. A few minutes after my head hit the pillow, I sat up in a state of panic to the sound of loud sniffing near the head of the tent. I was sure it was too loud to be a hyena and thought it might be a lion.
Alone and scared, not sure if the animal was behind the fence or by some chance had made it into the camp and was directly outside my tent, I grabbed my phone and dialled the number under the name ‘Alfie’ in my contact list. I hastily explained there was a loud sniffing sound and I was scared, to which the reply was, ‘’Where are you?’’. ‘’I’m in the tent,’’ I said to the man I thought was my boss. 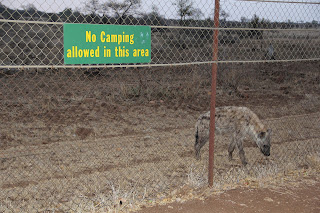 A surprised tone answered, ‘’Why are you in a tent?’. It hit me this was not the Alfie I had intended to call but rather a friend from back home. I quickly ended the call and hung up after a quick response of, ‘’I’ll call you later.’’
After deciding I would make a run for the nearby bathroom, I picked up everything I needed for my escape and fled, just to have what sounded like the mystery animal pounce at the fence. As soon as I reached the safety of being on the inside of the four walls of the bathroom, I called my parents in hysterics as I closed all the windows. After my parents succeeded in calming me down a bit, I waited in the bathroom for up to 20 minutes in the hopes that someone would come in for a midnight bathroom stop.
After I figured it didn’t seem anyone was coming I decided to run through the camp, not sure if I was being followed or not, to reach the Impi truck where I knew Charles was sleeping. Not only did I run through a huge spider’s web in my haste to reach the truck, but I got lost and ended up on the opposite side of the camp before finally making it to my destination. In hindsight I remembered a vital piece of advice is never to turn your back on a wild animal and run!
I explained my frightening adventure to Charles and was told that lions hang around often outside the fence and he had seen his fair share! Alone at night, in a tent just metres from the fence keeping the wildlife out, and being a fairly anxious person by nature, it sure was an experience I will never forget and one I would never replace. Maybe it was an elephant who got whiff of my scent or was munching on grass nearby or was it a lion who had picked up on the smell of a human as he was casually strolling by? We can only guess…