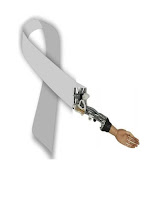 Amputation – The loss of part of or all of a limb either due to trauma or removal during surgery.
Traumatic amputation is when a limb is severed in an accident, animal attack, land mines or another dangerous situation.
Limbs might be amputated during surgery due to infections such as gangrene or frostbite, to lessen pain caused by the limb, deformed limbs or when there is no other option but to amputate during surgery due to complications in severe limb injuries. Illnesses such as diabetes or bone infections may lead to serious complications leaving no choice but for an amputation to be performed.
Of the 6.7 billion people living on the planet 10 million of them are amputees. Amputations of the leg are the most common of all types of amputations while an amputation of the entire lower body is the rarest.
Types of amputations
Amputations mainly fall into two different groups known as ‘upper limb amputations’ and ‘lower limb amputations.’ Lower limb amputations are the most common especially in older people due to illnesses such as diabetes or peripheral artery disease. Upper limb amputations are rarer and more common in the younger generation usually due to being involved in a serious accident.
There is also a group of amputations known as bilateral or trilateral which refers to multiple amputations. A seldom performed surgery and extreme amputation called hemicorporectomy or translumbar amputation involves the removal of the entire body below the waist, including the legs, pelvic bone and urinary system.
Upper limb amputations 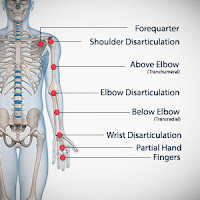 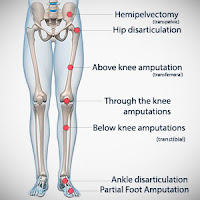 Partial foot – removal of toes.
Ankle disarticulation – removal of the foot at the ankle.
Below the knee – removal of the leg above the ankle but below the knee.
Knee disarticulation – removal of the entire leg including the knee.
Above knee amputation– removal of the lower leg including the knee and made at thigh level.
Hip disarticulation – removal of the entire leg.
Prosthetics, crutches and wheelchairs
Amputees have a variety of options to help them get on with their daily grind. Crutches help those with the loss of a lower limb amputation get around. Wheelchairs also offer a means of moving about for people with lower limb amputations. Many people take the route of getting a prosthetic to replace their amputated limb. Futuristic looking bionic arms and legs are also a way of replacing the function of amputated limbs.
Feelings associated with amputation
Depression, anxiety, hopelessness, loss and grief, PTSD and feeling socially withdrawn, among others, are emotions and mental health issues often connected with the news of an amputation. The fear of the unknown along with stress related issues are also common feelings experienced by those due for an amputation. Others have gone through the same experience and there are ways to get through this ordeal.
Counselling is sometimes suggested as well as gaining emotional support from loved ones. Face the emotions of the grieving process as they surface. Do not isolate yourself from those around you as this leads to loneliness and more mental health issues. Perhaps volunteer within the community as this brings on a sense of giving back, making one feel more fulfilled. With the right attitude and the support of those around you, a state of acceptance and happiness can be reached.
Phantom sensations and pain
An estimated 50 – 80% of amputees report the feeling of phantom pain or phantom sensations at some point. Phantom sensations refers to the feeling that the body part that was amputated is still there. Phantom pain is when ones amputated limb is painful, which often itches, burns, cramps or aches. These pains or sensations may also happen after the removal of body parts other than the limbs such as the removal of an eye.
It is thought that these unique sensations and pains have to do with a neural map that one’s brain has of their body, which sends information to the rest of the brain about limbs despite their lack of existence.
Phantom pains are dealt with by the amputee taking prescribed medication, desensitization or limb wrapping.
Read the personal stories about Charl who lost his eye in a brutal attack, and Sara who had her leg amputated due to illness.