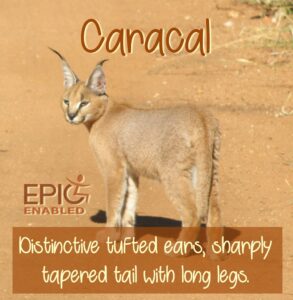 The CARACALis a slender, moderately sized wild cat characterized by a robust build, a short face, long canine teeth, distinctive tufted ears, sharply tapered tail and long legs. Its coat is uniformly reddish tan or sandy with white markings around its eyes and on its throat, chin, and belly.
Lifespan: 12 – 15 years (in the wild) and up to 19 years or longer in captivity
Speed: up to 80km/h
Scientific name: Caracal caracal
Mass: 12 kg – 20kg (Adult)
Height: 40 – 50cm (adult at shoulder)
Did you know:
Back Ear: The name Caracal is derived from the Turkish word “karakulak” which means “black ear”.
High-jumper: The Caracal is very agile and can leap higher than 3.7m to catch birds like guinea-fowl & pigeons in mid-air. Alternatively, it stalks its prey until it is within 5m of it and then gives chase. The Caracal resembles a cross between a leopard and a lynx, it has a powerful build and leopard-like bark.
Excellent tree climbers, caracal will drag their prey into a tree to be eaten away from other predators.
Habitat: Caracals live in the open, drier savannah and woodland regions of sub-Saharan Africa and prefer the more scrubby, arid habitats. They will also inhabit evergreen and montane forests but are not found in tropical rain forests. They hide and sleep in crevices among rocks and fallen trees.
Nocturnal: The caracal is highly secretive and difficult to observe. It is territorial and lives mainly alone or in pairs. The caracal is a carnivore that typically preys upon small mammals, birds and rodents. It is generally active at sunrise & sunset, although during the hottest months it hunts at night.
Unfortunately they also prey on livestock like goats and sheep, therefore are they are sometimes killed for suspected predation and as a result are very weary of humans.