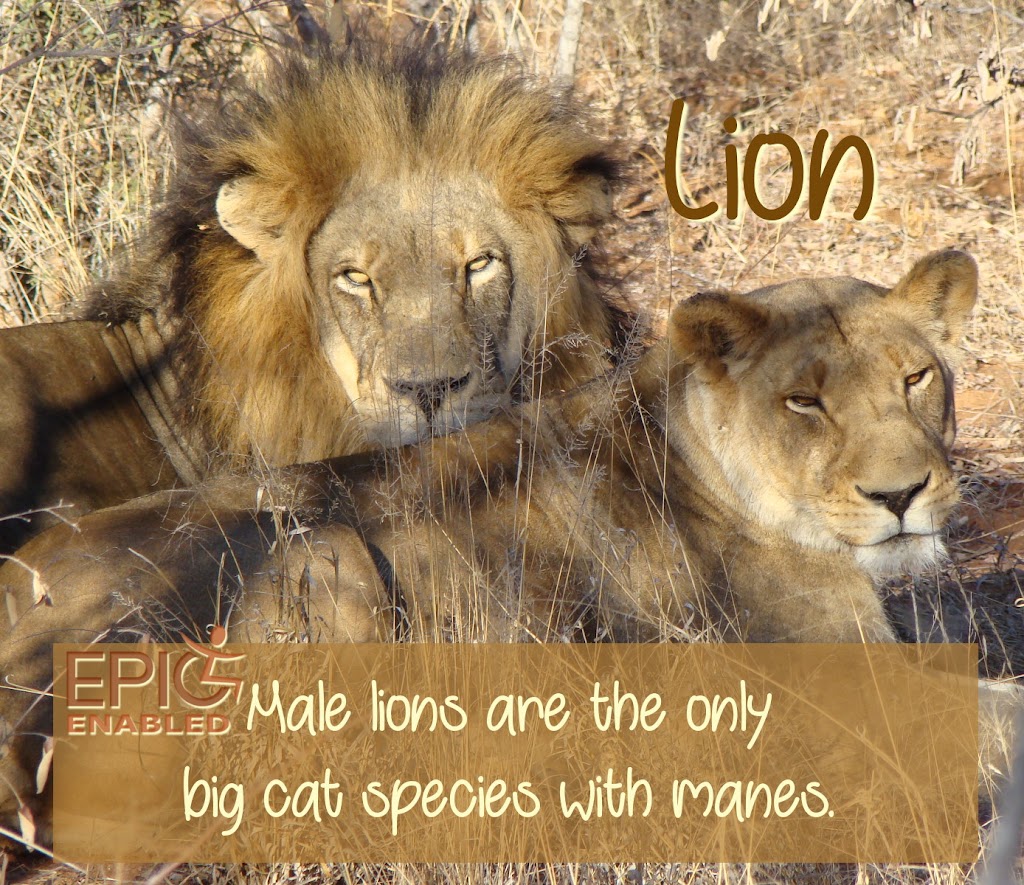 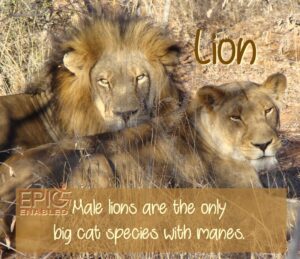 The LION is probably the most recognizable and best known species in the family Felidae; it is a muscular, deep-chested cat with a short, rounded head, a reduced neck and round ears, and a hairy tuft at the end of its tail. Largest Cat in Africa.
Lifespan: 10 – 14 years (adult, in the wild)
Speed: 80 km/h (max, in short bursts)
Scientific name: Panthera leo
Mass: Male adult; 150kg – 250kg, Female adult; 120kg – 185kg
Height: Male: 121cm at shoulder, Female at shoulder: 110cm at shoulder
Did you know:
A Complex Social Structure: Unlike other cats, lions are very social animals. They live in groups, called prides. A pride consists of multiple related females and their dependent offspring along with 1 – 3 unrelated males. A typical pride has about 15 members, although some prides as large as 40 members have been observed. The size of the pride is determined by the availability of food and water.
Male lions are the only big cat species with manes.
Biggest Cat in Africa, but only second largest cat in the world: A male lion weighs about 225kg and grows to 244cm in length. It sounds impressive, but tigers are actually larger, reaching 385kg and 335cm long
Territory: They inhabit grasslands and plains where female lions typically hunt together in groups, preying mostly on large mammals although they scavenge when opportunities occur.
Contrary to popular believes, male lions also can and will hunt very successfully when necessary, however if the males are part of a pride (not solitude nomads) they normally stay home and watch over the pride, defending their territory from other rival prides or predators. The males, however, are first to eat when the female lions come back with their kill.
Female bond: Female lions, sisters, live together for life. Their female cubs also stay with the pride, even after they’re grown, but male cubs must venture out on their own once they reach maturity
Majestic Manes: Male lions have majestic manes that make them appear larger and more intimidating. This is primarily a great layer of protection around their necks in fierce territorial fights. Female lions are also attracted to fuller, thicker manes.
Lion Roar: A male lion’s roar can be heard from up to 8km) away – the loudest roar of any big cat species. Their roar helps them find other lions as well as to proclaim their territory. A pride’s territory may include up to 260km².
Lions are more active during day time compared to other big cats, but when persecuted it adapts to being active at night & twilight