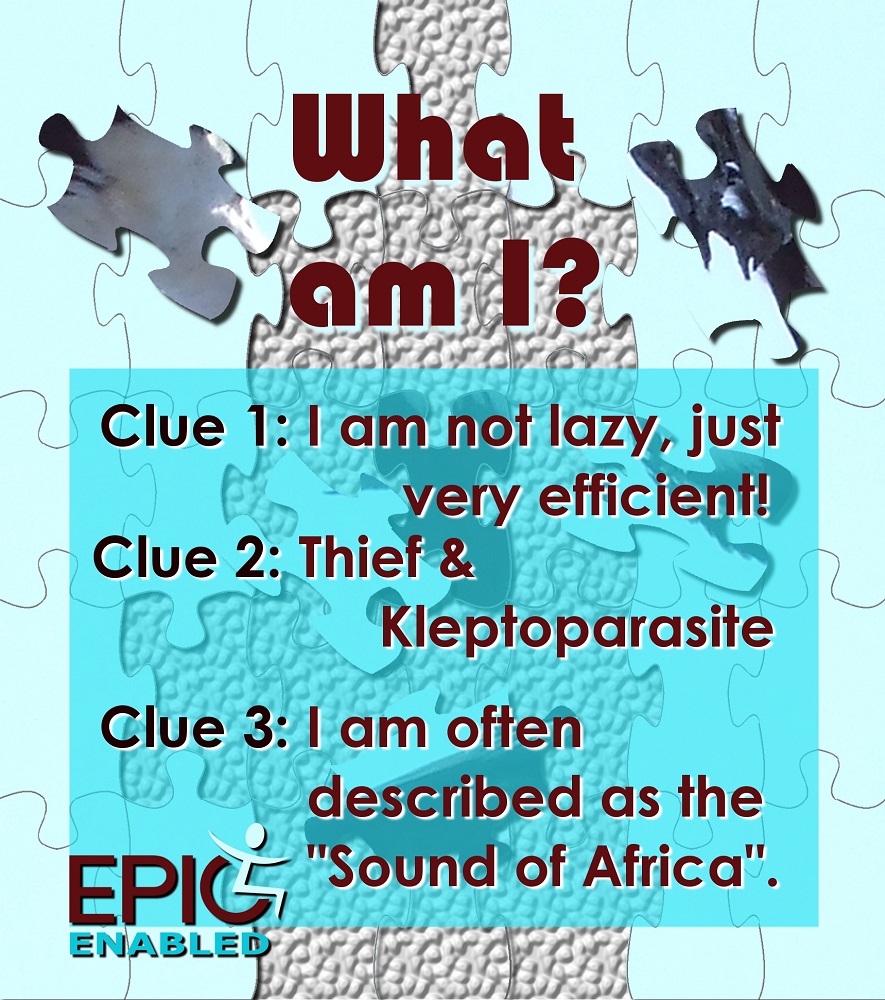 What animal am I? -> AFRICAN FISH EAGLE

Week 4 of our “What animal am I?” series .…Clues during the week -> featured animal revealed on Thursdays. 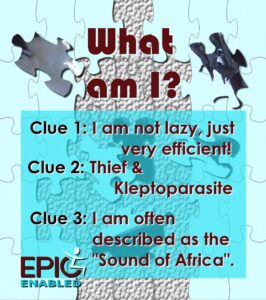 Clue 1: I am not lazy, just very efficient! ->  They spend most of the time perched in a tree beside the water watching for prey and territorial intruders, it only forages for 5 to 10% of the day. African fish eagles are very efficient hunters and only hunt for about 10 minutes each day.
Clue 2: Thief & kleptoparasite -> They habitually steal prey from other species.
Humans – You think we’re above it? The truth is, we’re master kleptoparasites! There are many instances in history of people stealing food from other people and we also “steal” edibles from other species. You might very likely be a kleptoparasite as well … have you eaten any honey lately?
Clue 3: I am often described as the sound of Africa -> Its “characteristic call of Africa” is, for many, evocative of the spirit or essence of Africa and often described as the “Sound of Africa”.

Which clue gave it away? 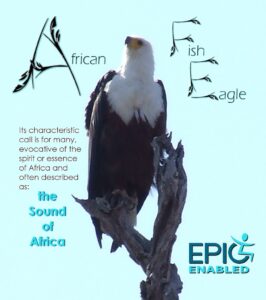 AFRICAN FISH EAGLE
This striking raptor is one of the most iconic birds of Africa, often also described as the sound of Africa.
The adult is very distinctive in appearance with a mostly brown body; large, powerful, black wings & the head, breast and tail are snow white. The exception is the featherless face, which is yellow. The eyes are dark brown in colour. The hook-shaped beak, ideal for a carnivorous lifestyle, is yellow with a black tip.
This species may resemble the bald eagle in appearance; though related, each species occurs on different continents, with the bald eagle being resident in North America.
African Fish Eagle:
Lifespan: 12 – 24 years
Speed: 80 km/h
Scientific name: Haliaeetus vocifer
Mass: 2kg – 205kg (male; 3.2kg – 3.6kg (female)
Wingspan: 2m (males); 2.4m (females)
Length: 63 – 77cm
Did you know: African Fish Eagle in isiZulu is inkwazi
Kleptoparasite: African fish eagles are kleptoparasites, which is to say they habitually steal prey from other species. Common victims of their piratical behaviour include goliath herons and saddle-billed stork.
Besides fish, they also eat young birds (especially water-birds such as ducks & flamingos), turtles and terrapins, baby crocodiles, lizards, frogs as well as carrion (decaying flesh of dead animals). Occasionally, it may even carry off mammalian prey, such as hyraxes, monkeys and even domestic chickens.
Should they catch very large prey and it is too heavy to allow the eagle to get lift, they will drag it across the surface of the water until it reaches the shore and will eat it on the ground next to the water.
Humans – You think we’re above it? The truth is, we’re master kleptoparasites! There are many instances in history of people stealing food from other people and we also “steal” edibles from other species. You might very likely be a kleptoparasite as well … have you eaten any honey lately?
African Sound: The African Fish Eagle has two distinct calls which have become known as the ‘sound of Africa’. The first of the calls are used in flights or when perched and is produces by flinging its head back as it vocalises, to make it louder.
When near the nest it has more of a ‘quock’ sound – the female is a little shriller and less mellow than the male.
Its “characteristic call of Africa” is, for many, evocative of the spirit or essence of Africa.
Fish eagle sound clip: CLICK HERE (source:klipvid1)
Habitat: This is a generalist species, requiring only large open bodies of water with sufficient prey and a good perch, as evident by the number of habitat types in which this species may be found, including grassland, swamps, marshes, tropical rain-forest, fynbos, and even desert-bordering coastlines. The African fish eagle is absent from arid areas with little surface water.
Acrobatic aerial skills: Courtship includes the birds calling in duet as they fly over their territory. The actual courtship display involves the male diving down at the female who roles over in flight to present her talons.
The female is usually the most aggressive of the pair in defense of the territory. If another female violates her airspace, she will either call to see it off or more likely attack it from below. They interlock talons and actually tumble sometimes 100m to the ground.
African Fish Eagles are believed to be monogamous and mate forlife. Even so, the male must win the heart of the female each year. The pair meets in mid-air, locks talons and free-falls until they separate just above the ground.
For life: African fish eagles breed during the dry season, when water levels are low. They are believed to mate for life. Pairs often maintain two or more nests, which they frequently reuse. Because nests are reused and built upon over the years, they can grow very large, some reaching 2 m across and 1.2 m deep.
The females lay 1-3 eggs which are primarily white with a few reddish speckles. The chicks leave the nest at the age of about 3 months. The plumage of the juvenile is brown in colour, and the eyes are paler compared to the adult. They will take 4 – 5 years to develop their magnificent adult plumage.
Siblicide (the killing of an infant siblings, could also be mediated by the parents) does not normally occur with African Fish Eagle and the parents often successfully rear two or three chicks.
Talons:To help grip fish and other slippery prey, the African Fish Eagle has long sharp talons which are coated in barbs called spiricules.
Lazy or efficient? The African fish eagle spends most of the time perched in a tree beside the water watching for prey and territorial intruders, it only forages for 5 to 10% of the day. Africanfish eagles are very efficient hunters and only hunt for about 10 minutes each day.
Sight & flight: An eagle in flight can reputedly sight a rabbit 3.2km away. Talon–eye coordination is a hunting imperative. From its perch at the top of trees, the eagle can dive at speeds of 200 – 322 km/h to catch its prey by its talons.
Eagles (and most large birds) fly by soaring; it’s much more energy efficient than flapping their wings. We do use the technique for our own flights.
Claim to Fame: This bird’s conspicuous nature and charismatic presence ensure it figures prominently in the folklore and heraldry of several nations. You will find it on the Zimbabwean & Zambian Flags as well as on the coat of arms of Namibia, Zambia & South Sudan.