What animal am I? -> BUFFALO 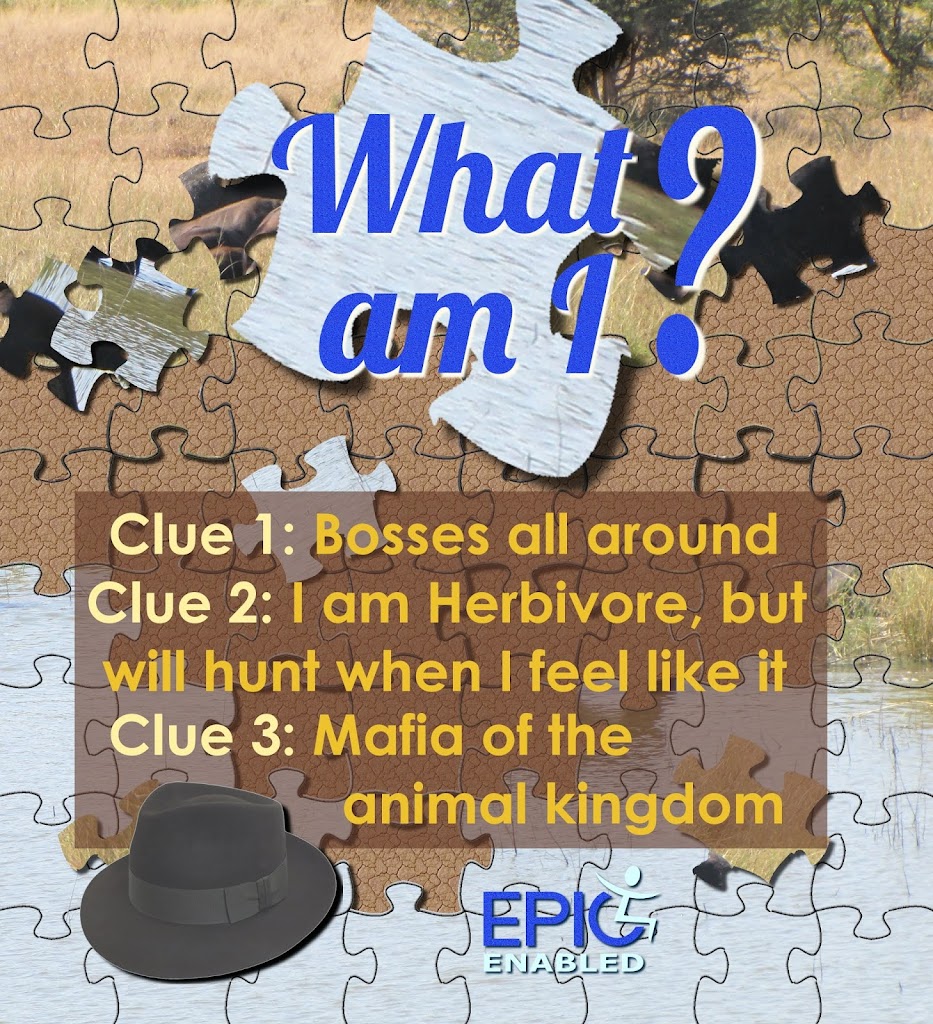 Week 3 of our “What animal am I?” series .…Clues during the week -> featured animal revealed on Thursdays. 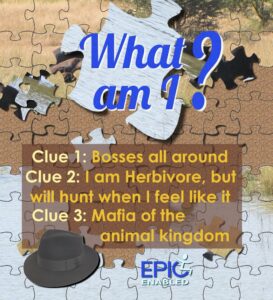 Clue 1: Bosses all around-> The adult male buffalo’s horns have a fused bases, forming a continuous bone shield across the top of the head referred to as a “boss”.

Clue 2: I am Herbivore but will hunter when I feel like it -> They have a great dislike for predators and given the chance, they will attack and trample young/vulnerable lion/hyena/cheetah without being attacked first. Their best defense is to attack and that is what makes them so dangerous.

Clue 3: Mafia of the animal kingdom -> They are referred to as the “mafia” of the animal kingdom because of its steely gaze, never flinching and unnerving demeanor that demands respect. The strong silent types who aren’t fond of those interrupting them. These strong characters never forgive and simply ambush their “prey” without giving any type of warning signal. 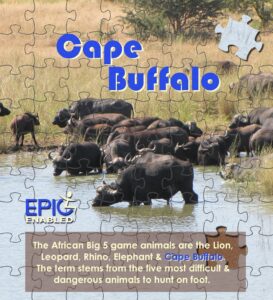 The collective noun for buffalo is “herd”, but other terms include “gang” and “obstinacy”.
The Cape buffalo is the silent strong type you don’t want to upset! Their unflinching steel gaze will make you squirm out of their way. They go about their daily routine and don’t like interruption. They carry on their path, no matter what or who is in their way. The Cape buffalo are 4x stronger than an ox.
Lifespan: 20 years
Speed: 56 km/h
Scientific name: Syncerus caffer
Mass: 350 kg – 870 km (adult)
Height:  100 cm – 170cm (adult, at shoulder)
Length: 200cm – 335cm
Boss: The Cape buffalo is a very robust species; it has a long but stocky body and short but thickset legs. The adult male buffalo’s horns have a fused bases, forming a continuous bone shield across the top of the head referred to as a “boss”. The horns form fully when the animal reaches the age of five or six years, but the bosses do not become “hard” till 8 to 9 years old. In cows, the horns are, on average, 10–20% smaller, and they do not have a boss.
The body of Cape buffalo is covered with hair that can be brownish to black in color. Calves of have reddish coats.
Friends with benefits: The Oxpecker is just that, they have a symbiotic relationship! They sit on the Cape Buffalo’s hide and remove the ticks/insects embedded in their skins.
Food:While not particularly demanding to their habitat, they require water daily, and therefore depend on constant sources of water. The Cape buffalo is a grazer and prefers tall grasses to short shrubs. Herds of buffalo mow down grasses and make way for more selective grazers.
Dominance:Adult bulls spar in play, dominance interactions, or actual fights. A bull approaches another, lowing, with his horns down, and waits for the other bull to do the same thing. When sparring, the bulls twist their horns from side to side. Actual fights are violent but rare and brief.
Dagga boy:A lone buffalo is most likely an old male buffalo also called “dagga boy” (“Dagga” referring to the thick black clay that coats their skin; ‘dagga’ being another word for mud). Dagga boys are older bulls past their prime which have separated from their heard as they no longer can compete with the younger dominant males. They are solitary or form small group of other dagga boys.
Pathfinder:The most experienced cows are known as pathfinders. They are responsible for taking the herd to the most beneficial area for grazing and water.
Calves: Buffaloes mate and give birth only during the rainy seasons. Buffalo cows have their first calves at age 4 or 5 and they become completely reliant on their mothers, right up until a year old.
Voting? Females appear to exhibit some sort of “voting behavior”. During resting time, the females stand up, shuffle around, and sit back down again. They sit in the direction they think they should move. After an hour of more shuffling, the females travel in the direction they decide. This decision is communal and not based on hierarchy or dominance however the pathfinders will lead them.
Strong bond:When chased by predators, a herd sticks close together and makes it hard for the predators to pick off one member. Calves are gathered in the middle. A buffalo herd responds to the distress call of a captured member and tries to rescue it. A calf’s distress call gets the attention of not only the mother, but also the herd. Buffaloes engage in mobbing behavior when fighting off predators. They have been recorded killing a lion and chasing lions up trees and keeping them there for two hours, after the lions have killed a member of their group. Lion cubs can get trampled and killed.
Diseases: The Cape buffalo is susceptible to many diseases, including bovine tuberculosis, corridor disease and foot and mouth disease. This can be devastating if they encounter infected domestic cattle. As with many diseases, these problems remain dormant within a population as long as the health of the animals is good. These diseases do, however, restrict the legal movements of the animals and fencing infected areas from unaffected areas is enforced.
Herbivore – Hunter: Other than humans, Cape Buffaloes have few predators and are capable of defending themselves against (and killing) lions. Lions do kill and eat buffalo regularly, but it typically takes quite a few lions to bring down a single adult buffalo.
An average-sized crocodile will attack only old solitary animals and young calves, though they can kill healthy adults too.
If a buffalo herd comes under attack, they form a circle around their young. All the adults’ face outwards in an effort to hide the vulnerable. The adults lower their heads and form a protective barrier with their horns.
They have a great dislike for predators and given the chance, they will attack and trample young/vulnerable lion/hyena/cheetah without being attached first.
Their best defense is to attack and that is what makes them so dangerous.
Big 5: In Africa, the Big Five game animals are the Lion, Leopard, Rhino, Elephant & Cape Buffalo. The term stems from the five most difficult & dangerous animals in Africa to hunt on foot. The Cape Buffalow is known as “the Black Death” or “widowmaker” and is widely regarded as a very dangerous animal.
According to some estimates, it gores and kills over 200 people every year. Buffaloes are sometimes reported to kill more people in Africa than any other animal, although the same claim is also made of hippos and crocodiles.
Mafia: They are referred to as the “mafia” of the animal kingdom because of its steely gaze, never flinching and unnerving demeanor that demands respect. The strong silent types who aren’t fond of those interrupting them. These strong characters never forgive and simply ambush their “prey” without giving any type of warning signal.
Domestic: Its unpredictable temperament means that the Cape Buffalo has never been domesticated.