What animal am I? -> GIRAFFE

Week 6 of our “What animal am I?” series .…Clues during the week -> featured animal revealed on Thursdays. 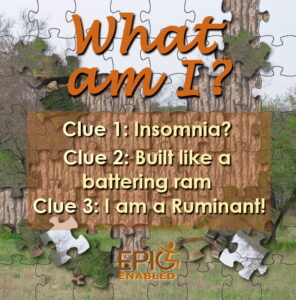 Clue 1: Insomnia? -> They usually sleep standing, sometimes sitting, curl their necks and sleep for about five minutes at a time, sleeping no more than 30 minutes a day.
Clue 2: built like a battering ram -> Male giraffes fight for females by “necking”. They stand side by side and swing the backs of their heads into each other’s ribs and legs. Their skulls are thick and they have horn-like growths called ossicones on the tops of their heads. Their heads are like battering rams and are capable of breaking their opponents’ bones.
Clue 3: Ruminant -> any of various cud-chewing hoofed mammals having a stomach divided into 4 (occasionally 3) compartments. Ruminants are mammals that are able to acquire nutrients from plant-based food by fermenting it in a specialized stomach prior to digestion, principally through microbial actions. 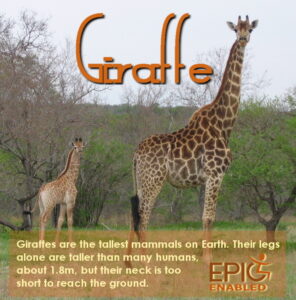 Did you know: Evolution – around 15 million years ago, antelope-like animals were roaming the dry grasslands of Africa. There was nothing very special about them, but some of their necks were a bit long.
Within a mere 6 million years, they had evolved into animals that looked like modern giraffes, though the modern species only turned up around 1 million years ago. Giraffes are the tallest mammals on Earth with the okapi being its closest relative.
The Giraffe’s legs alone are taller than many humans—about 1.8m, but their neck is too short to reach the ground. 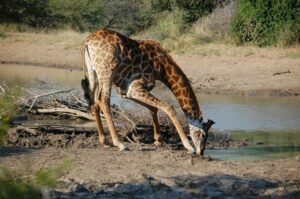 Giraffe:
Lifespan: 20 – 25 years (in the wild)
Speed: 60 km/h for short sprints & 50 km/h for several km
Scientific name: Giraffa
Mass: 800kg – 1200kg (female – male adult)
Height: 4.3 – 5.7 m (female -male)
Name: “Camelopard” is an old English name for the giraffe deriving from the Ancient Greek for camel and leopard, referring to its camel-like shape & movements and its leopard-like colouring.
Herd: Giraffes live in herds of related females and their offspring, or bachelor herds of unrelated adult males, but are sociable and may gather in large aggregations. Males establish social hierarchies through “necking”, which are combat bouts where the neck is used as a weapon.

Neck & necking
A giraffe’s neck alone is 1.8 – 2.4 m long and weighs about 272 kg. The animal’s legs are also around the same length. Their necks are however too short to reach the ground. As a result, it has to awkwardly spread its front legs or kneel to reach the ground for a drink of water.
Until recently it was assumed that giraffes’ long necks evolved to help them feed, reaching leaves on tall trees that nobody else can reach.  This advantage is real, as giraffes can and do feed up to 4.5 m high, while even quite large competitors, such as kudu, can feed up to only about 2 m high.
Picture: The giraffe (right) and its close relative the okapi (left) both have 7 cervical vertebrae (like us humans!). However the giraffe’s vertebrae’s can EACH be over 28 cm long

New research however has another theory: Male giraffes use their necks as weapons in combat to fight for females by “necking”. They stand side by side and swing the backs of their heads into each other’s ribs and legs. To help with this, their skulls are unusually thick, and they have horn-like growths called ossicones on the tops of their heads. Their heads are like battering rams and are capable of breaking their opponents’ bones. What do you think, plausible?
Horns: Both male and female giraffes have two distinct, hair-covered horns called ossicones. The ossicones of females and young are thin and display tufts of hair on top, whereas those of adult male’s end in knobs and tend to be bald on top.

Thick-skinned: The skin of a giraffe is mostly gray. Its thickness allows the animal to run through thorn bushes without being punctured. The fur may serve as a chemical defence, as its parasite repellents give the animal a characteristic scent. However some parasites feed on giraffes and they may rely on oxpeckers to clean them of ticks and alert them to danger.

High Blood pressure: The tallest ever giraffe was 5.8 m tall and to pump blood all the way up its long neck, the giraffe has several adaptations in its cardiovascular system. Its heart, which can weigh about 12 kg and measures 60 cm long, must generate approximately double the blood pressure required for a human to maintain blood flow to the brain. Giraffes have unusually high heart rates for their size, at 150 beats per minute.
Making it the biggest heart in the animal kingdom!
When the animal lowers its head the blood rushes down a complex web of arteries and veins lying very close to each other in the upper neck, prevents excess blood flow to the brain. When it raises again, the blood vessels constrict and direct blood into the brain, so the animal does not faint. The jugular veins contain several (most commonly seven) valves to prevent blood flowing back into the head while the head is lowered.
Legs & movement: The skin of the lower legs is thick and tight preventing too much blood from pouring into them. Their legs are incredibly powerful and each of them ends in a hard, sharp, 30-centimetre hoof. A giraffe can kick in any direction and in a manner of ways and its kick can not only kill a lion.
Unsurprisingly, very few predators bother an adult giraffe. However, in the Kruger National Park, lions have adapted to chase Giraffes across tar roads in the hope they slip so they can get to the Giraffes necks to kill them without exposing themselves to the dangerous kicks.
A giraffe walks like a camel, moving the legs on one side of the body at the same time, then doing the same on the other side. When galloping, the hind legs move around the front legs before the latter move forward. The giraffe relies on the forward and backward motions of its head and neck to maintain balance while galloping. If you have ever watched a giraffe gallop, you will agree – it looks like slow-motion.
Calf:  The mother gives birth standing up. The calf emerges head and front legs first and falls to the ground, severing the umbilical cord. A new-born giraffe is 1.7–2 m tall. After their +/- 2m drop at birth, the giraffe calf can stand up and walk about an hour later and within a week, it starts to sample vegetation.
Mothers with calves will gather in nursery herds, moving or browsing together. This is known as a “calving pool”.
Habitat: Grasslands and open woodlands of sub-Saharan Africa. Its scattered range extends from Chad in the north to South Africa in the south, and from Niger in the west to Somalia in the east. Giraffes usually inhabit savannahs and woodlands.
Food: A giraffe eats around 34 kg of foliage daily, primarily acacia species. As a *Ruminants*, the giraffe first chews its food, then swallows it for processing and then visibly passes the half-digested cud up the neck and back into the mouth to chew again. Giraffes only need to drink once every few days as most of their water comes from all the plants they eat.
*Ruminant*: any of various cud-chewing hoofed mammals having a stomach divided into four (occasionally three) compartments. Ruminants are mammals that are able to acquire nutrients from plant-based food by fermenting it in a specialized stomach prior to digestion, principally through microbial actions. 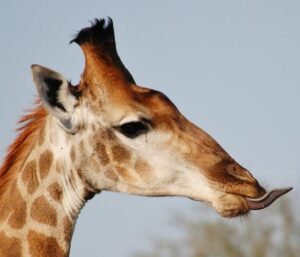 Tongue: The giraffe’s tongue is about 45 cm long. It is purplish-black in colour, perhaps to protect against sunburn, and is useful for grasping foliage, as well as for grooming and cleaning the animal’s nose.

Insomnia: In the wild, giraffes almost never lie down because of vulnerability to predators. They usually sleep standing, sometimes sitting, and they give birth standing up. When giraffes sleep, they curl their necks and sleep for about five minutes at a time, sleeping no more than 30 minutes a day.