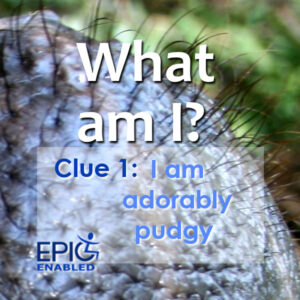 Week 7 of our “What animal am I?” series .…
Clue 1: I am adorably pudgy -> the adoringly pudgy hippos are one of the most aggressive animals on Earth and kill about 500 people in Africa each year. 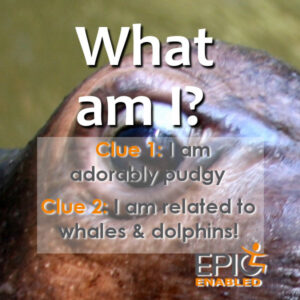 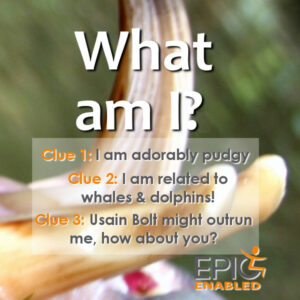 Clue 2: I am related to whales & dolphins! -> Until 1909, hippos were grouped with pigs and other hoofed animals, based on molar (tooth) patterns and their physical resemblance. However modern research with blood proteins, DNA and the fossil records show that the closest living relatives of the Hippos are aquatic mammals like whales, dolphins etc.
Clue 3: Usain Bolt might outrun me, how about you? -> A hippo can run 30-40km/h on land & “swim” 8km/h … Usain Bolt’s set the  record of 44.72km/h during the 100 meters sprint at the World Championships in Berlin on 16 August 2009. Bolt’s average speed over the course of this race was 37.58 km/h… me thinks the hippo might win in a race against me! 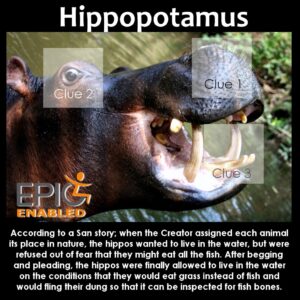 Evolution: Translated from the ancient Greek it means “river horse”. After the elephant the hippo is the 2nd largest type of land mammal (only rivaled by some large rhinos). The hippopotamus is a large, mostly herbivorous, semiaquatic mammal native to sub-Saharan Africa. There are only two species of hippos left: the common hippo and the much smaller pygmy hippo.

Until 1909, hippos were grouped with pigs and other hoofed animals, based on molar (tooth) patterns and their physical resemblance. However modern research with blood proteins, DNA and the fossil records show that the closest living relatives of the Hippos are aquatic mammals like whales, dolphins etc. from which they diverged about 55 million years ago. 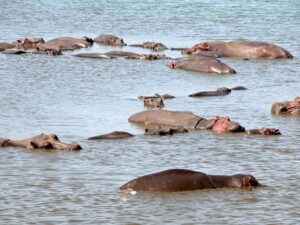 The eyes, ears, and nostrils of hippos are placed high on the roof of their skulls. This allows them to breath and see while the rest of the body is submerged. They can hold their breath for up to six minutes underwater. When completely submerged, their ears and nostrils fold shut to keep water out. 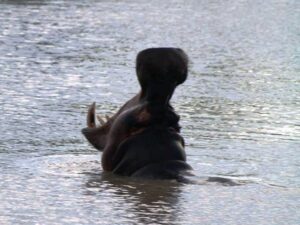 The jaw hinge is located far back enough to allow the animal to open its mouth at almost 180°. The bite force of an adult has been measured as 8,100 newtons (similar to bench-press 825kg in weights!) and can easily snap a canoe in half with their powerful jaws, Hippos teeth sharpen themselves as they grind together. The incisors can reach 40 cm, while the canines reach up to 50 cm and are only used for combat.
Sunscreen: The hippo has very little hair, but a 6cm think layer of skin which provides great protection. The animals’ upper parts are purplish-grey to blue-black, while the under parts and areas around the eyes and ears can be brownish-pink.
Their skin secretes a natural sunscreen substance which is red-coloured. The secretion is sometimes referred to as “blood sweat” but is neither blood nor sweat. This secretion is initially colourless and turns red-orange within minutes, eventually becoming brown.
Nevertheless, this natural sunscreen cannot prevent the animal’s skin from cracking if it stays out of water too long.
Biggest killers in Africa: Humans, Mosquitos, Tsetse Fly, Black mamba, Buffalo, & Hippo — the adoringly pudgy hippos are one of the most aggressive animals on Earth and kill about 500 people in Africa each year.
Semiaquatic: Different from all other large land mammals, hippos are of semiaquatic habits, spending the day in lakes and rivers. Proper habitat requires enough water to submerge in and grass nearby. Despite being semiaquatic and having webbed feet, an adult hippo is not a particularly good swimmer nor can it float. It is rarely found in deep water; when it is, they sink to the bottom and move by pushing off the bottom in leaps.
Hippos leave the water at dusk and travel up to 10km inland to graze on short grasses, their main source of food. They spend four to five hours grazing and can consume 36kg of grass each night.
The hippo has a complex three-chambered stomach but does not “chew cud“. They can store two days’ worth of grass in their stomachs and can go up to three weeks without eating. Hippos are born with sterile intestines, and require bacteria obtained from their mothers’ faeces to digest vegetation.
Speed: Though they are stocky animals, hippos can gallop at 30-40 km/h on land but normally trot; and can move at speeds up to 8 km/h in water, typically resurfacing to breathe every three to five minutes. Usain Bolt’s set the  record of 44.72km/h during the 100 meters sprint at the World Championships in Berlin on 16 August 2009. Bolt’s average speed over the course of this race was 37.58 km/h
Habitat: Hippos inhabit rivers, lakes and mangrove swamps, where territorial bulls preside over a stretch of river and groups of five to thirty females and young. They emerge at dusk to graze and use the same paths on land which, over prolonged periods, can divert the paths of swamps and channels.
Grazing is a solitary activity and hippos are not territorial on land except if you get between IT and the water. 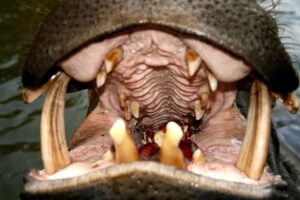 Territorial: The territories of hippos exist to establish mating rights and dominant males are very protective over their group. To warn off rival males, they open their huge mouths and display their long, curved canines! They also make loud grunts and aggressive splashes in the water.
“Yawning” serves as a threat display. When fighting, male hippos use their incisors to block each other’s attacks and their large canines to inflict injuries.
Hippos mark their territory by defecation. While depositing the faeces, hippos spin their tails to distribute their excrement over a greater area.
Communication: Hippos appear to communicate vocally, through grunts and bellows, and they may practice echolocation. Hippos have the unique ability to hold their heads partially above the water and send out a cry that travels through both water and air; individuals respond above and under water. Hippos will also express threat and alarm with exhalations.
Cleaning stations: As with fish and turtles on a coral reef, hippos occasionally visit cleaning stations. By opening their month wide, they signal readiness for being cleaned of parasites by certain species of fishes.

STORIES: Hippopotamuses have been the subjects of various African folktales. According to a San story; when the Creator assigned each animal its place in nature, the hippos wanted to live in the water, but were refused out of fear that they might eat all the fish. After begging and pleading, the hippos were finally allowed to live in the water on the conditions that they would eat grass instead of fish and would fling their dung so that it can be inspected for fish bones.
In a Ndebele tale, the hippo originally had long, beautiful hair, but was set on fire by a jealous hare and had to jump into a nearby pool. The hippo lost most of his hair and was too embarrassed to leave the water.