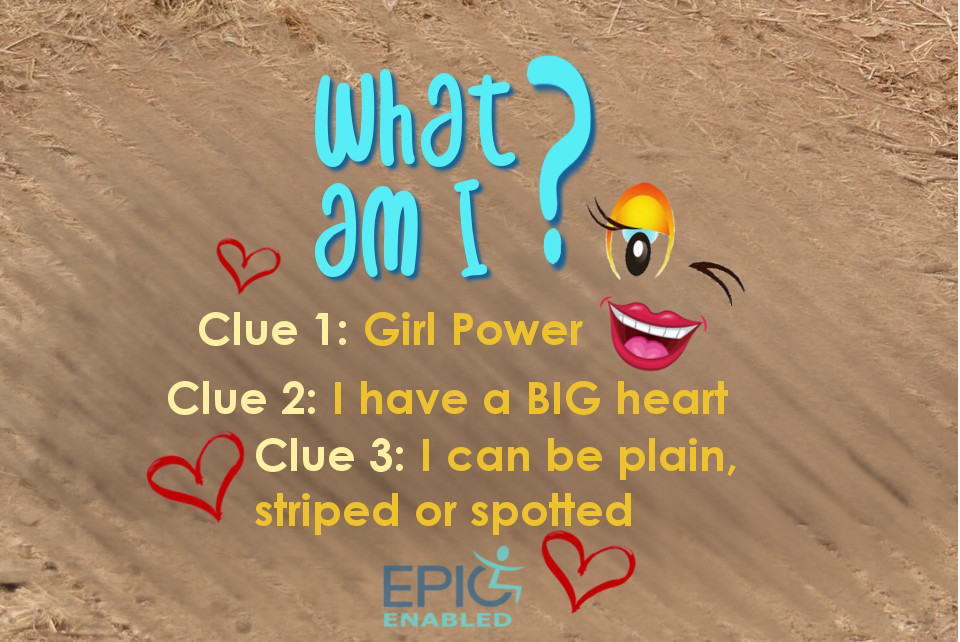 Week 2 of our “What animal am I?” series …Clues during the week -> featured animal revealed on Thursdays. 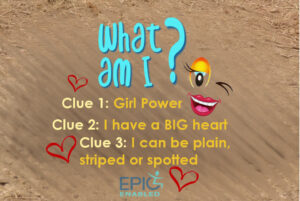 Clue 1: Girl Power 👧 -> females rank higher than males, are larger in size and the group is led by one powerful alpha female.

Clue 2: I have a big heart 💗 -> spotted hyena has a proportionately large heart, constituting close to 1% of its body weight, thus giving it great endurance in long chases. In contrast, a lion’s heart makes up only 0.45–0.57 percent of its body weight.
Clue 3: I can be plain, striped or spotted -> The brown hyena is plain, the striped hyena & Aardwolf are striped, and the spotted hyena has spots. 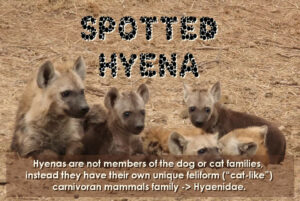 Hyenas are not members of the dog or cat families, instead they have their own unique feliform (“cat-like”) carnivoran mammals family -> Hyaenidae.
With only four extant species, it is the fifth-smallest biological family in the Carnivora, and one of the smallest in the class Mammalia.

Despite their low diversity, hyenas are unique and VITAL components of most African ecosystems.

They’re more closely related to cats than dogs, but their closest relatives are the Herpestidae -> mongooses, meerkats etc
Hyenas live in groups called clans or packs and are creatures of the night.
SPOTTED HYENA:
Lifespan: 12 – 25 years
Speed: 60 km/h
Scientific name: Crocuta Crocuta
Mass: Female: 44 – 64 kg (up to 82kg!), Male: 40 – 55 kg
(Striped hyena: 22 – 55 kg, Brown hyena: 40 – 44 kg)
Height:  70 – 92 cm (adult, at shoulder)
(Striped hyena: 60 – 80 cm, Brown hyena: 70cm)
Girl Power: Spotted hyenas are social mammals and live in structured groups, called clans. There is a strict hierarchy, where females rank higher than males, and the group is led by one powerful alpha female. Males have the lowest status in the pack and are forced to leave their family when they reach sexual maturity. Their fight to enter a new pack is often deadly and the dominant female will determine their fate.
Cubs:A Female hyena gives birth to 2 – 4 cubs a year, which she nurses in a den. Cubs are born with soft, brownish black hair, and weigh 1.5 kg on average. Unique among carnivorous mammals, spotted hyenas are also born with their eyes open and with 6–7 mm long canine teeth and 4 mm long incisors. Female hyenas only have two nipples, therefore cubs often fight for food from the mother which is highly nutritious, sometimes to the death.
As the youngsters grow up, males will often leave to join a different clan, whereas females will remain in the same clan for life.
Looks:The spotted hyena is the largest of them has a strong and well-developed neck and forequarters, but relatively underdeveloped hindquarters. The rump is rounded rather than angular, which prevents attackers coming from behind.
For its size, the spotted hyena has one of the most powerfully built skulls among the Carnivora. The dentition is more dual purposed (hunter & scavenger) than that of other modern hyena species. Combined with large jaw muscles and a special vaulting to protect the skull against large forces, these characteristics give the spotted hyena a powerful bite which can exert a pressure of 40% more force than a leopard can generate. The jaws of the spotted hyena outmatch those of the brown bear in bone-crushing ability!
The female hyena is dominant, larger in size and more aggressive than the male. Females have a ‘pseudo-penis’, which is an elongated clitoris (only mammalian species to lack an external vaginal opening), though they are not hermaphrodite.
Big heart: The spotted hyena has a proportionately large heart, constituting close to 1% of its body weight, thus giving it great endurance in long chases. In contrast, a lion’s heart makes up only 0.45–0.57 percent of its body weight.
Predator:The reputation of the hyena as a coward is unfounded and hyena are aggressive competitors in the bush with great endurance and persistence. Unlike its BROWN & STRIPED cousins, the SPOTTED HYENA is a predator, not a scavenger.
They kill and eat baby lion, leopard and other predators. Spotted hyenas often hunt in groups and can take down big animals such as wildebeest, antelope, zebras and young hippos. Smaller snacks on their menu include birds, fish, snakes, lizards and insects.
Hyena are cannibals and will attack and eat other hyenas, including their young.
Adaptability: Its success is due in part to its adaptability and opportunism; it is primarily a hunter but may also scavenge, with the capacity to eat and digest skin, bone and other animal waste. Equipped with a super-strong jaw and teeth, the spotted hyena makes the most efficient use of animal matter of all African carnivores and nothing goes to waste.
The spotted hyena displays greater flexibility in its hunting and foraging behaviour than other African carnivores; it hunts alone, in small parties of 2–5 individuals or in large groups. During a hunt, spotted hyenas often run through ungulate herds in order to select an individual to attack. Once selected, their prey is chased over a long distance, often several kilometres, at speeds of up to 60 km/h.
Reputation: Hyenas feature prominently in the folklore and mythology of human cultures that live alongside them. Hyenas are commonly viewed as frightening and worthy of contempt. In some cultures, hyenas are thought to influence people’s spirits, rob graves, and steal livestock and children. Other cultures associate them with witchcraft, using their body parts in traditional African medicine.
Cackle: Spotted hyenas make a sound resembling laughter when they are excited which gives them their nickname ‘laughing hyena’.  Their cackling sounds can be heard from a distance of 4,8km…. so listen out for me 😄