What animal am I? -> MEERKAT 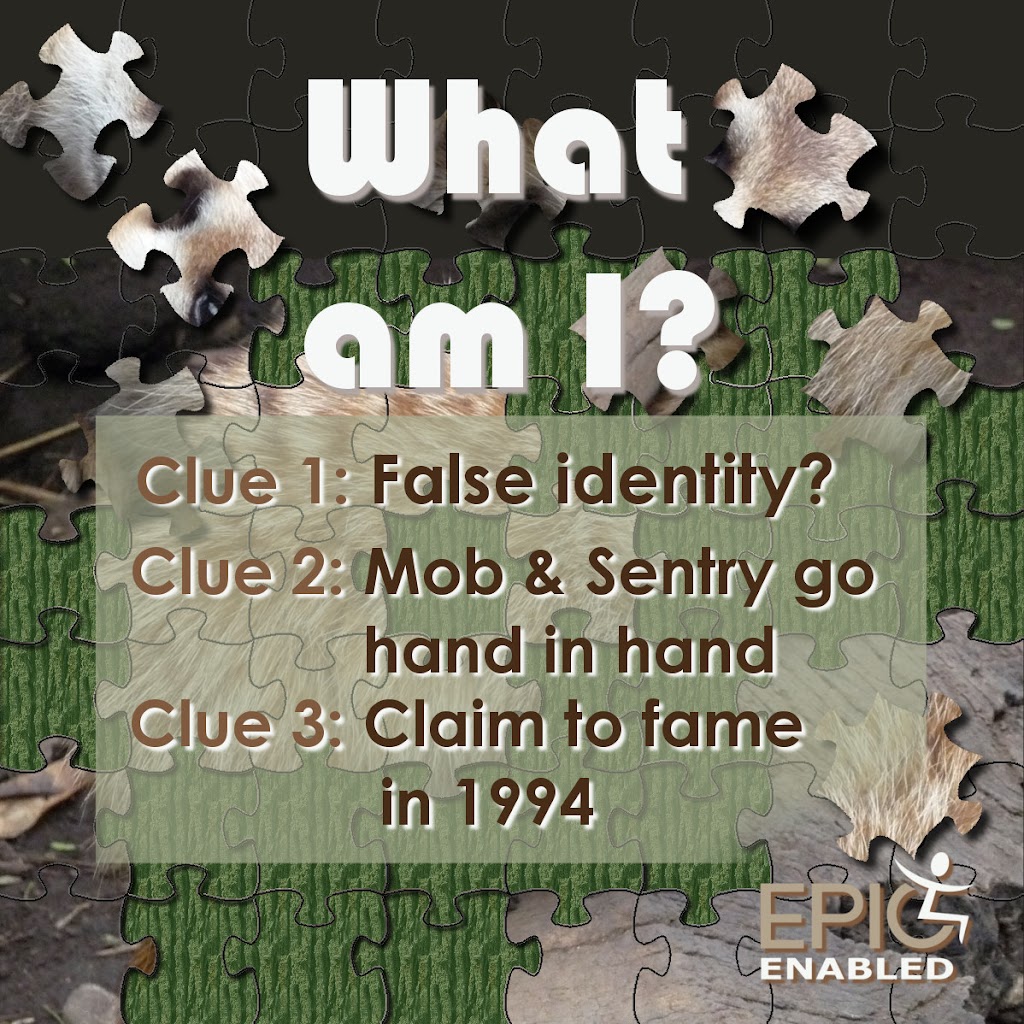 Week 4 of our “What animal am I?” series .…Clues during the week -> featured animal revealed on Thursdays. 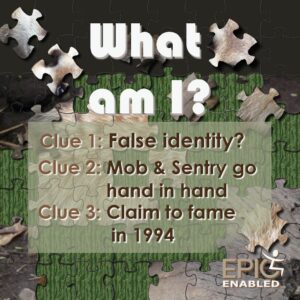 Clue 1: False identity? -> The word Meerkat is Dutch/Afrikaans for “lake cat”, although Meerkats don’t live near lakes and they are not cats. They in fact belong to the Mongoose family.
Clue 2: Mob & sentry go hand in hand -> A group of meerkats is called a “mob”, “gang” or “clan”. Meerkats forage in a group with 1 -2 sentries watching for predators while the others search for food.
Clue 3: Claim to fame in 1994 -> Timon (Meerkat) and Pumbaa (Warthog) are the famous duo introduced in Disney’s 1994 animated film “The Lion King”. Hakuna matata – no worries! 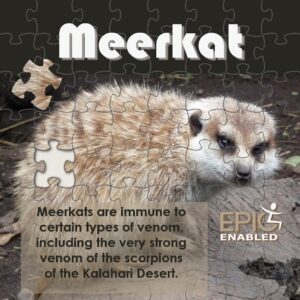 The meerkat belongs to the mongoose family and are active during the day. It is the only member of the genus Suricata. Meerkats live in all parts of the Kalahari Desert in Botswana, in much of the Namib Desert in Namibia, southwestern Angola, and in South Africa.
Meerkat:
Lifespan: 12 – 14 years (in captivity)
Speed: 32 km/h
Scientific name: Suricata suricatta
Mass: 0.6 to 0.9 kg (adult)
Body length: 25 – 35cm (adult without tail)
Did you know: A mob/clan of meerkats will always have one “sentry” on guard to watch out for predators while the others forage for food.
False identity: The word Meerkat is Dutch/Afrikaans for “lake cat”, although Meerkats don’t live near lakes and they are not cats. In addition in casual Afrikaans, mier means termite, and kat means cat. It has been speculated that the name comes from their frequent association with termite mounds or the termites they eat.
Mob: A group of meerkats is called a “mob”, “gang” or “clan”. A meerkat clan often contains about 20 meerkats, but some super-families have 50 or more members of which usually all are related. They are normally territorial and live in large underground tunnels. The mob comprised of equal numbers of males and females and these family groups, are led by an alpha pair, with the female being the most dominant.
Each meerkat mob will have a territory which they mark off with their scent. It is usually around 10km². They won’t allow another group or mob of meerkats into their territory and will fight them, if needed. They move around within the territory each day in order to forage for food in different spots.
If the group feels threatened by a predator, they will sometimes try mobbing or attacking it in a group. Although they usually run, they can be fierce fighters when needed.
Sentry: Meerkats forage in a group with 1 – 2 sentries watching for predators while the others search for food. Sentry duty is usually approximately an hour long. The meerkat standing guard makes peeping sounds when all is well. Meerkats have binocular vision, with two eyes on the front of the face as well as sense of smell and hearing. Generally, the sentry or lookout, will stand up straight on its hind legs using its tail as a tripod to balance.
This is so that it can get as high as possible to look for predators in the air and on the ground.
When a predator is spotted, the lookout meerkats will give a warning bark or whistle and rest of the family will quickly escape into one of the many entrances of their underground burrow. They take night shelter in their vast network of underground tunnels which also doubles to keep them cool from the hot desert sun.
Claim to fame: Timon (Meerkat) and Pumbaa (Warthog) are the famous duo introduced in Disney’s 1994 animated film “The Lion King”.
Famous quote: Hakuna matata roughly translates to “there are no troubles” in Swahili, was translated to the now popular phrase “no worries.” Which is the opposite of the meerkat’s behaviour!
Meerkats popularity grew further with the TV show Meerkat Manor from Animal Planet that followed several Meerkat families in the Kalahari Desert.
When colonies are exposed to human presence for a long time, they will become habituated, which allows for documentation of their natural behaviour. It is not unusual for camera crews, who must largely stay still for long periods while filming, to be utilized as convenient sentry posts.
Features: Meerkats have four toes on each foot and at the end of each of them is a claw used for digging burrows and digging for prey. Claws are also used with muscular hindlegs to help climb trees. The eyes are distinctively dark-ringed, with their coat being usually peppered grey, tan, or brown with silver. They have short parallel stripes across their backs with dark-tipped, short-haired, tapered tails.
The underside of the meerkat has no markings, but the belly has a patch which is only sparsely covered with hair and shows the black skin underneath.
Diet: Meerkats are omnivores, meaning they eat both plants and animals. They catch their preferred insects, small rodents, geckos, snakes, scorpions, spiders, eggs, small mammals, millipedes, centipedes and sometimes small birds with lightning swiftness, but also feed on plants and fungi (the desert truffle).
Since they don’t have a lot of body fat, meerkats need to eat every day to keep their energy up. For example, meerkat adults teach their pups how to eat a venomous scorpion: they will remove the stinger and help the pup learn how to handle the creature.
Predators: Martial eagles, tawny eagles and jackals are the main predators of meerkats. Meerkats are immune to certain types of venom, including the very strong venom of the scorpions of the Kalahari Desert. However some snakebites from the Puff Adder & Cape Cobras can lead to death.
Breeding: In each clan there is an alpha pair of meerkats that lead the group. The alpha pair typically reserves the right to mate and produce offspring. If others in the clan reproduce, then the alpha pair will usually kill the young and may kick the mother out of the clan.
The entire group participates in the care and maintenance of young. While the pack is out foraging for food, one helper remains at the den to tend to the young. They babysit the young in the group and will protect them threats, often endangering their own lives. On warning of danger, the babysitter takes the young underground to safety and is prepared to defend them if the danger follows. Animals in the same group groom each other regularly.
Meerkats, being wild animals, make poor pets. They can be aggressive, especially toward guests and they may also bite. They will scent-mark their owner and the house (their “territory”)