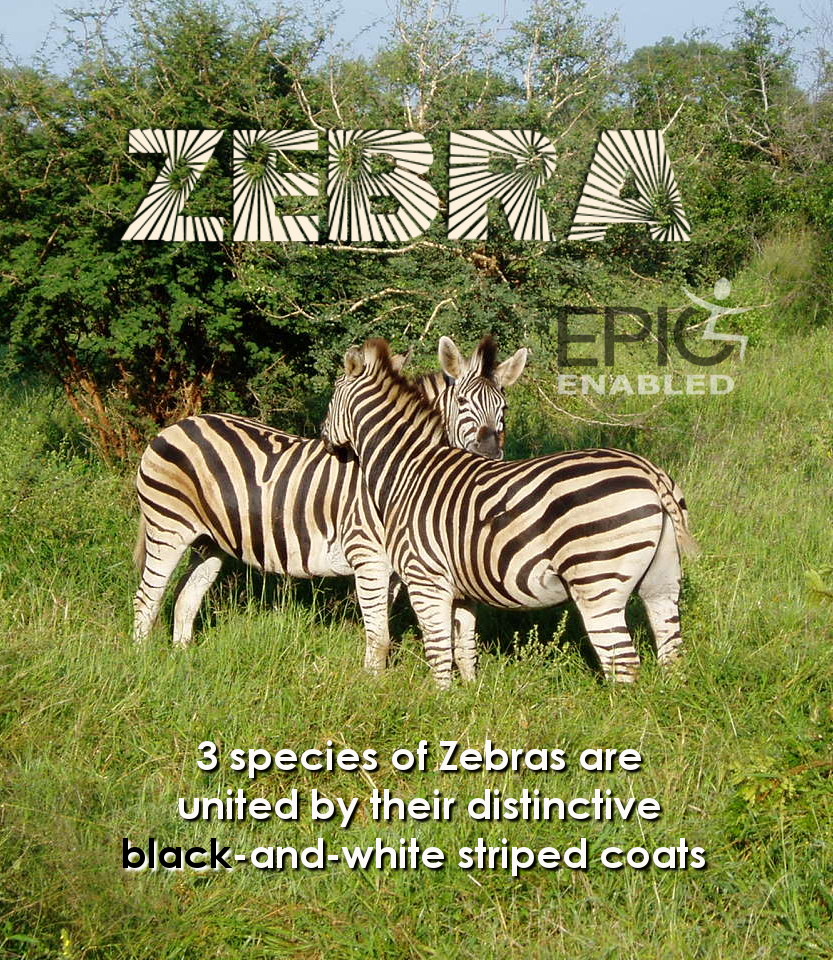 By SabineApril 25, 2019June 30th, 2022No Comments
We are starting a new weekly animal in depth series…clues during the week -> featured animal revealed on Thursdays.
Yes, you got it right, this weeks featured animal is the ZEBRA. 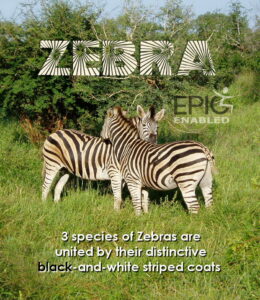 There are three different species of zebra in Africa, the Plains Zebra, Grevy’s Zebra and Mountain Zebra united by their distinctive black-and-white striped coats. Their stripes come in different patterns, unique to each individual (like our fingerprints). They are generally social animals that live in small harems to large herds. Unlike their closest relatives, horses and donkeys, zebras have never been truly domesticated due to their stubborn nature.

The most common zebras we see on our Epic Enabled safaris are the Burchell’s Zebra which is a southern subspecies of the Plains Zebra. It is named after the British explorer and naturalist William John Burchell.
Burchell’s Zebra:
Lifespan: 20 – 30 years (in the wild), up to 40 years in captivity (Zoos)
Speed: 65 km/h
Scientific name: Equus quagga burchellii
Mass: 200 – 280kg (adult)
Height: 110cm to 140cm at shoulder
Body length: 2.2-2.5m
Did you know:
Habitat: They occur in a variety of habitats, such as grasslands, savannas, woodlands, thorny scrublands, mountains, and coastal hills. Various anthropogenic factors have had a severe impact on zebra populations, in particular hunting for skins and habitat destruction. Grévy’s zebra and the mountain zebra are endangered. While plains zebras are much more plentiful, one subspecies, the quagga, became extinct in the late 19th century.
Quagga: A South African zebra, extinct since 1883, that had a yellowish-brown coat with only the front half of their bodies covered with darker stripes.
Dazzle: A group of zebras are referred to as a herd, dazzle, or zeal.
Meaning of Dazzle: brightness that blinds someone temporarily…(synonyms: brightness, brilliance, glow, flash, shimmer, radiance, shine, flare, glare, blaze)
Stripes: Why do zebras have stripes? Scientists are not entirely sure and there are multiple theories.
1)   Their stripes serve to dazzle and confuse predators making it difficult to distinguish one individual in the blur.
2)   Control the animal’s body heat because air moves at different speeds over light-absorbing black stripes and light-reflecting white stripes, so the zebra creates its own cooling air currents.
3)   Each individual’s stripes are unique, their stripes may also have a social purpose, helping zebras to recognize individual
4)   New studies also show that it reduced biting insects landing on their confusing/bury patterns. Thus, avoiding fly & insect related illnesses common to horses.
Food: Zebras are herbivores and spend most of their day eating grass, leaves, shrubs twigs and bark. Their teeth are well adapted for grazing, with sharp incisors at the front of their mouth to bite the grass, and large molars at the back for crushing and grinding.
They are constantly on the move for fresh grasslands & water. They travel thousands of kilometres in search of green pastures.
Well-nourished appearance: You will never see a slim Zebra, they always appear “fat”. This is due to their bloated stomachs filled with bacteria helping to digest all the grass they eat. This fermentation produces a lot of gas and will bloat their stomach, giving them a well-nourished appearance.
Even when a zebra is sick it will still appear fat. You can differentiate a healthy to sick zebra by their manes. They have a strip of fat below their manes and if they are in good condition their mane will stand up straight, but as they become sick they will use this fat reserve and the mane will start to flop over.
Posing for the Camera:  Some of the most popular Zebra photos are when they stand next to each other, but facing away from one another and resting their head on each others back. They are not only watching each others backs but also using each others tails as a fly swatter for their faces.
Alfie’s trick-question: Are male zebras black with white stripes and females are white with black stripes or other way around? … When you first hear this statement on tour, you will take a minute to think about it 😉
Zebras are mostly covered in white fur and striped with black, but underneath their coat the skin is black.
Fierce: As elegant and peaceful as they are, zebras can be aggressive animals and are very protective of their family! Stallions fight for females with piercing bites and powerful kicks that are strong enough to cause serious damage – and sometimes even kill! Their fierce fighting skills, powerful kicks and strong social bonds help to protect zebras from predators, which include lions, leopards, hyenas and cheetahs. And if one of the group is wounded or injured, other zebras will circle around and attempt to drive off the hungry attacker. All for one and one for all!