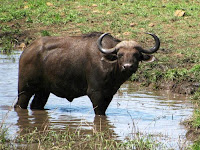 The Cape buffalo is also known as the African buffalo and is not closely related to the Water buffalo found in Asia. They are regarded as extremely dangerous animals when they have been wounded or provoked and will fight to stay alive.
These buffaloes are believed to kill more people than any other wild animal found in Africa, and even remember those who have tried to hurt them before. As the saying goes, ‘an elephant forgets but a buffalo never forgives.’
They are impressive creatures with the characteristic feature being their horns that are fused together at the base. Their horns are used as deadly weapons to defend themselves and their herd members against threats; people and animals alike. 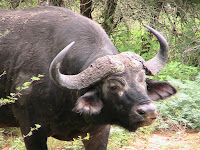 The only natural predators out to get buffaloes are the lions and the great Nile crocs. However buffalo young are easy prey for leopards and hyenas. If a predator doesn’t get these magnificent beasts, they can live up to 25 years old.
Habitat
These buffalos are never far from water, living in grassland, swamps, savannahs and lowland floodplains. They are said to never be further than 20 km (12 miles) from a source of water. They lie under trees to cool down when the African sun gets a little too hot and are also known to emerge themselves to refresh in water. 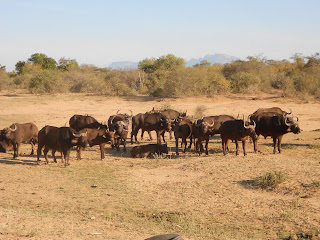 Behaviour
Cape Buffalos are very social animals and live within herds of usually at least a dozen and sometimes up to a 1 000 or more buffaloes. They either live together with a mix of both males and female with their buffalo calves, or may live in divided gender herds. Old bulls will often leave the herd and form smaller groups called bachelor herds.
Diet
They are herbivores and prefer to eat long grass while making way for other grazers. If they can’t find any long grass, buffaloes also enjoying snacking off trees and shrubs. They need to drink at least once a day and this is why they are never far away from water.
Reproduction
These beasts mate between March and May, usually giving birth to one calve after carrying them for 9 to 11 months. The calf is completely dependent on their mother and suckle up to one year. The mother will tend to her calve showing love, protecting over the little one and even playing with them.
Did you know?
Cape Buffaloes are fast runners and can easily run up to almost 60 kilometres an hour (37 miles).
They are four times stronger than the Ox, so forget the saying ‘strong as an Ox’. 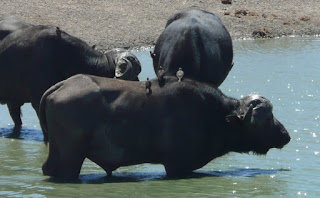