24Feb
Hi, my name is Geoff and I recently was given the opportunity to accompany Alfie Smith on one of the Epic safaris to the legendary Kruger National Park, as well as Tshukudu Private Reserve.  Not having been to either one of the reserves, I was highly excited to not only view the spectacular sightings, but to also be involved in what Epic Enabled strives for.
Reaching the Malelane Gate, the southern-most gate of the Kruger, we started our drive towards our first rest camp, Skukuza for two nights. We spotted Giraffe, White Rhino, and impala (which we later found out, are huge in abundance in the park and known as the “McDonalds of the bush”).  All this excitement, and we hadn’t even reached our first camp. It was a perfect start of things to come. Later the following day, we spotted our first leopard, the more elusive of the Big 5.

Satara Rest Camp would be home for the following two nights. We enjoyed several interesting safari drives, the most entertaining and exciting of these drives was the day of the Lion spotter! While keeping a watchful eye for any movement in the surrounding foliage, two majestic black mane male lions, (possibly brothers) casually came strolling down the road towards the van. Undisturbed by gasps and camera flashes, the two brothers stopped to quench their thirst at a nearby puddle. They then continued to stroll down the road without a care in the world, an expected attitude from the king of the wild. 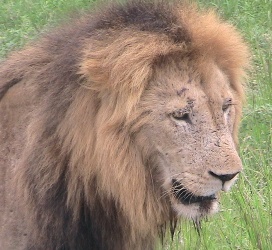 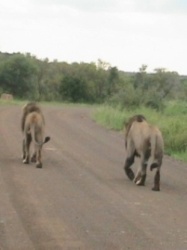 Excited about our luck so far and what more could be in store, we decided to drive on. Stopping suddenly on the empty road, to snap shots of a vulture, perched in a tree to the right of the van. Thinking this was a great sign as vultures mean the remains of a recent kill which means carnivores must be close. In fact they were closer than we thought. As we were about to drive off in pursuit of these carnivores I looked over to the left side of the van and right there were a pride of approximately fifteen adolescent lion cubs and lionesses. Shocked that no other cars were around, we had front row seats to view these stunning animals, animals we so nearly missed.

Following the two nights in Satara we made our way to Tshukudu Private Reserve to add to the incredible memories. After walking with year old adolescent lions, feeling their velvet coats under our fingers; Meeting Jessica the hippo and feeding her sweet potato; walking with adolescent cheetahs, watching these graceful animals drink from the pond and meeting a baby caracal, feeding her a bottle before letting her play in the garden. This brought our adventure to a very memorable close.
During the adventure Alfie informed us of various facts about the animals seen, answered everyone’s questions, and even enlightened us with a few personal stories and encounters of his own. It was a pleasure to see how everyone interacted together as a group. Throughout the tour we were lucky enough to see the Big 5, which is always a great experience for everyone. Of course seeing these magnificent creatures, and all the wild animals and birds in their natural habitat, leaves you with a deep feeling of awe and gratitude, building memories not easily forgotten by anyone.