07May
Rhinoceros Beetles snatch their name from the endangered animals of the rhino because the male beetles have horns, very much like a rhino does.
These beetles come from the family of the scarab beetles and are one of the biggest beetles in the world. They can reach a size of 60 millimetres in length and are the strongest animals on the planet proportional to their size. They can lift a whopping 850 times their own weight!
Rhino beetles have two horns with each one being slightly forked at the end. These two horns almost meet at the centre, and can be moved when the beetle moves it head causing them to pinch together.
They come equipped with two sets of wings and are able to fly. The outer set of wings is for protection of the real wings which enable them to fly. 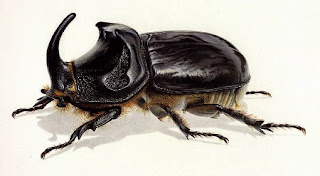 These beetles are found on every continent in the world except for the very cold Antarctica. They live among the plants on the ground, leaf litter and fallen down logs. The rhinoceros beetle finds a safe haven within the forage.
They make for easy to look after pets and do well in captivity.

The male rhino beetle are the only of the genders to have horns which they use during battles against other males in the fight for mating.
These beetles are nocturnal, eating at night and hiding out during the day.
They make loud hissing squeak like sounds when disturbed.

Larvae eat lots of rotting wood or compost while the adult beetles enjoy munching on nectar, plant sap and fruit.

Each female lays up to 50 eggs at a time. These eggs then hatch into larvae after three weeks. The larvae remain at that stage for between three to five years.
They then develop into pupae which become the world’s biggest beetle!
The rhinoceros beetle can’t bite, sting or hurt you with their horns unlike the mighty rhino. They have to watch out for birds and snakes who hunt them. These beetles are strong flyers and attracted to the beauty of light at night time.
Now we close off with the last of Africa’s Little 5! Be on the look-out for an article featuring some interesting facts about all the interesting animals you have been reading about in the past few weeks.