11May
Steve together with his wife Marilyn set out to celebrate their Ruby Wedding. They joined Epic Enabled on an 8 day safari trip back in 2012 and this is their story of their wild adventure. 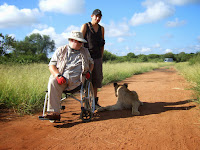 In 1996 Steve was seriously injured in a horrific accident that left him with two smashed legs, a broken collar bone, ribs and even a b broken big toe. He was treated for three years but in the end due to infection he asked for his left leg to be amputated above the knee. He now spends most of his time cruising on his set of wheels. 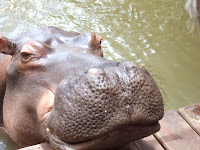 They arrived in Johannesburg to begin the expedition of a lifetime where they were met by Alfie. A restaurant dinner was arranged for the travellers to meet and for Alfie to share the plan for the great adventure ahead. A couple from London, and a Spanish photographer were to join them for the bush.

The following day they left Johannesburg and hit the open road, where they enjoyed the South African scenery. Upon entering the famous Kruger National Park they immediately started to spot wildlife such as bucks, giraffe, zebras, buffaloes and warthogs. Steve described how ”the variety of wildlife especially birds were astounding as well as the amount of foliage and vegetation.” 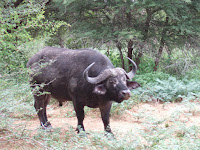 The first stop off was at the camp known as Skukuza which Steve explained, ‘’the accommodation was excellent, and although outside it was hot, inside it was pleasant and easy to sleep.” They moved on to the camp Satara which they truly enjoyed. 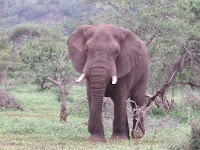 After four days in the Kruger National Park they headed off to a private game reserve, where they could stroke lions and cheetahs in the breeding programme. They also fed an adorable caracal cub with a bottle of milk. A baby crocodile was introduced into the wild by the people who run the reserve, Steve and the group were lucky enough to be able to be a part of the release. Finally they were taken to feed Jessica the Hippo some delicious rooibos tea.
Steve described Alfie as, ”a marvellous chef and the meals were plentiful, varied and delicious.” They were out in the bush early mornings, returning to relax before lunch time and would go out afterwards again for another adventurous three hours. 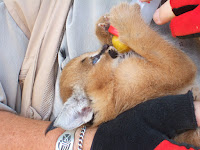 ”Alfie’s knowledge was invaluable, not only in identification of the animals and birds but also his knowledge of where they might be found,” Steve told me.
Highlights
All the Big 5 were spotted in one day- the rhino, lion, elephant, leopard and the buffalo.
Two male lions were seen by Steve, Marilyn and the group, who strolled past the truck and drank from a puddle before moving off behind them. Shortly afterwards driving a little further on, they came across a pride of around 20 lions, lionesses and cubs, relaxing after most likely having devoured a meal. 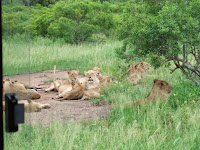 ”All in all we had a fantastic time and would love to do it all again. You couldn’t ask for a better organiser and guide than Alfie – his experience in firstly the country, wildlife and the safari’s but also his experience in handling wheelchairs and the needs of those in wheelchairs. It is ideal for all not just wheelchair users but if you are in a wheelchair and want to go on a proper safari, then this is it,,” according to Steve.