The truth about the Rhino massacre

The magnificent rhino which has been roaming the Earth for around 60 million years, is under grave threat from heartless poachers. They are facing near extinction. By 2025 rhinos might no longer walk our planet if poaching continues at the rate it is.
Many years ago there were thirty different species of the rhino but in todays World there are only five species left. Rhinos used to be found in great numbers throughout Africa and Asia with a population of about 500 000 in the early 20thcentury.
Three of these species are types of Asian Rhinos and two of the species are African Rhinos. All rhinos are listed as threatened but three of these species are known to be critically endangered, meaning that they are facing a very high risk of extinction in the wild.
The name Rhinoceros comes from the ancient Greek word meaning ‘horned nose’, which can grow up to three inches a year. It is this very horned nose that has put them on the top of the list for poaching, with a black market value higher than that of cocaine and gold.
Rhino horn is believed in Chinese traditions to hold magical healing powers for helping to heal ailments such as arthritis, vomiting, and even cancer among others. However this belief has been scientifically disproved yet poaching is still very real.  A rhinos’ horn is made from the same substance that your hair and nails are made of – keratin. In Vietnamese the rhino horn is used as a recreational drug. 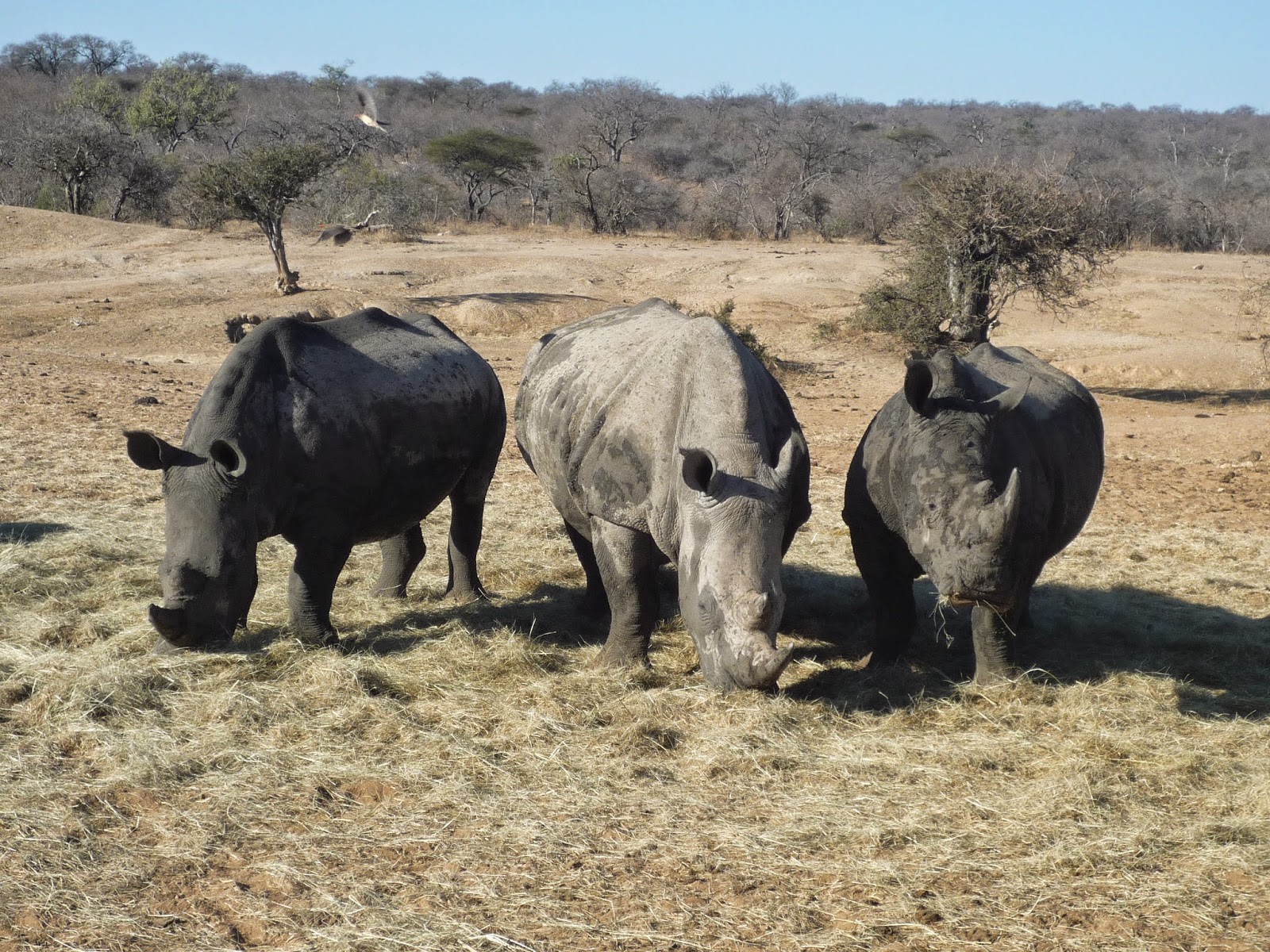 The rhino horn also holds a superficial status of wealth for the elite and is made into dagger handles, bowls, and necklaces among other ornamental uses.
A rhino’s horn belongs on a rhino, with which they have many uses. Their horns are used to dig into the ground to uncover food, or as a weapon for self-defence, and mother rhinos use their horns to guide their babies.
In India and Nepal, organized gangs of poachers pay the poverty stricken locals to tell them where the rhinos can be found. These gangs then move into the location of the rhinos and kill them. Other devastating actions against rhinos take place in Malaysia and Indonesia, where forest plantations are growing at rapid rates, which end up destroying the rhinos’ habitat.
When a rhino’s horn is so cruelly taken from them this is often done without anaesthesia, causing them immense agony. Rhinos are also sometimes killed before their horns are taken either by being shot or they overdose on tranquillers. Once their horn has been stolen they are abandoned without shame by the poachers and can easily succumb to the brutal act by bleeding to death. If they do survive after the attack, the wound could become infected.

South Africa has the largest population of rhinos found in the world making poaching rive within the country. During 2014, in South Africa, 1 215 rhinos were killed by poachers, shockingly that is one killed every 8 hours. Kruger National Park holds the majority of South African rhinos making it the biggest hotspot for poaching.
The number of poached rhinos has increased from 1 004 in 2013, despite efforts in the fight against the illegal slaughter of rhinos. If poaching remains at this rate or gets worse, by the year 2018, rhino deaths will overtake births.
Last year 386 arrests were made on poachers compared to 165 arrests in the year 2010. Punishments have become more severe and arrests are on the increase. 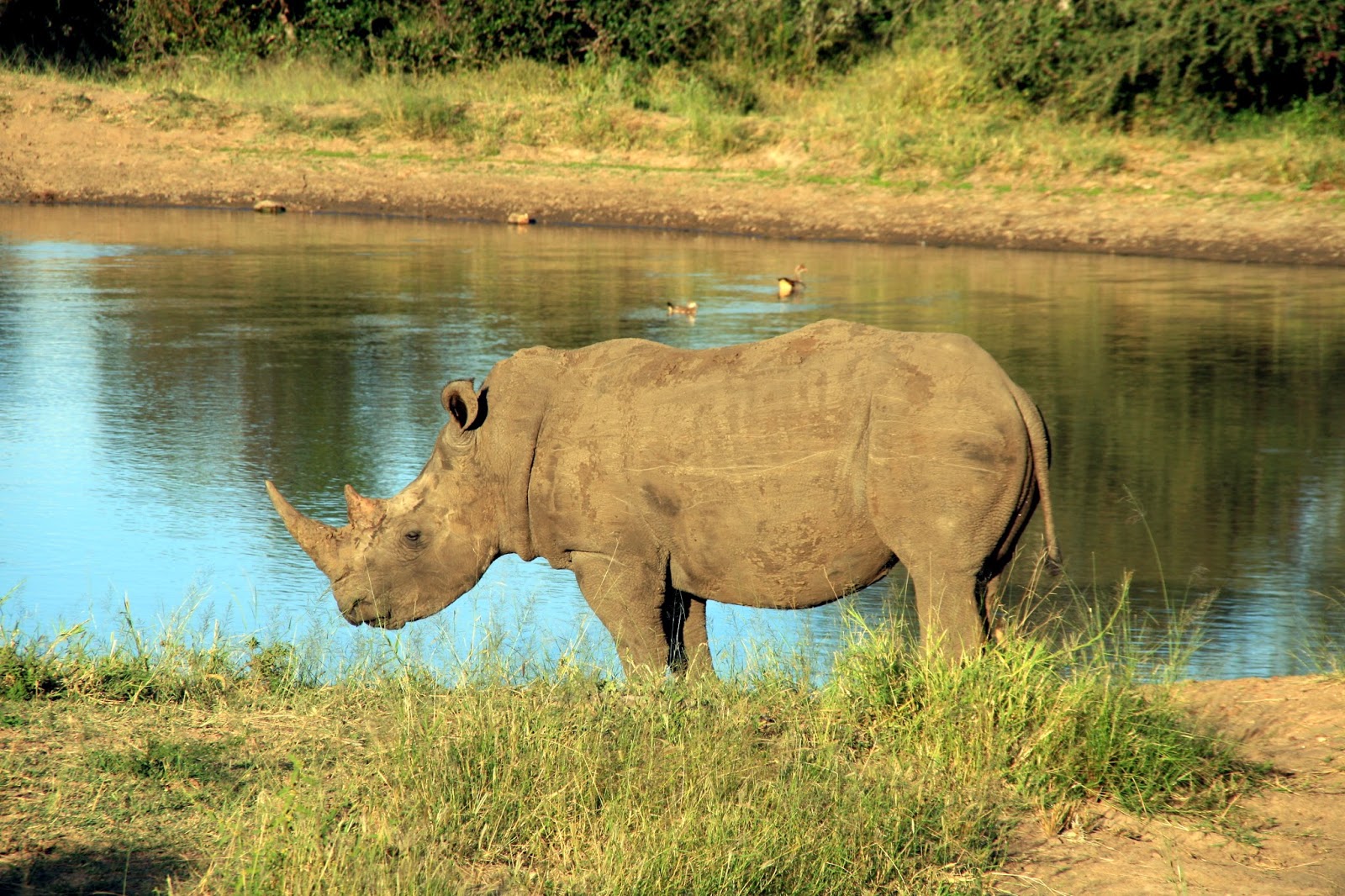 The fight against poaching

Foundations such as Save the Rhino International, WWF and Stop Rhino Poaching are doing their best to help the rhinos survive this horrendous massacre.

You can play your part by making a donation which goes towards training and equipment.

Never reveal the location you have seen any rhinos as poachers might be able to access that information. Report any activity you see as suspicious.
According to News24, tourists over this past weekend (25th – 26thApril 2015) played a part in the arrests of poachers in Kruger National Park. They spotted two men crossing a road late at night, alerted the rangers who then called in the SAPS. The two men were apprehended and found in possession of two rhino horns, a rifle, ammunition and poaching equipment.

The truth about the West African Black Rhino

Their numbers drastically decreased in the 1970’s and 1980’s due to the illegal act of poaching.
They were the rarest of the black rhino subspecies and were officially declared extinct in 2011 by the International Union for the Conservation of Nature.
By the year 2000, there were only 10 remaining.
2001, was the last time Western African Black Rhinos were seen. Five were seen in Cameroon.
Searches continued through to 2006 for the rhinos, and that is when they were declared likely to be extinct.
Scientific American gave news that the Western African Black Rhino was confirmed extinct in November of 2011.
On the internet, news of the extinction spread in the years 2011, 2013 and again this year, 2015 but it was first noted to be likely extinct in 2006.
I hope that the bad guys get caught, put behind bars and the key thrown away.
I dream that rhinos will once again flourish the planet and that the young children of today will get to see the rhinos of tomorrow.

They are herbivores that either graze on grasses or eat trees and bushes depending on whether they are a Black or White Rhino.

Black and white rhinos have different lip shapes.
Rhinos have extremely good hearing and a great sense of smell, which makes up for their poor eyesight.
These impressive animals can sleep standing or lying down.